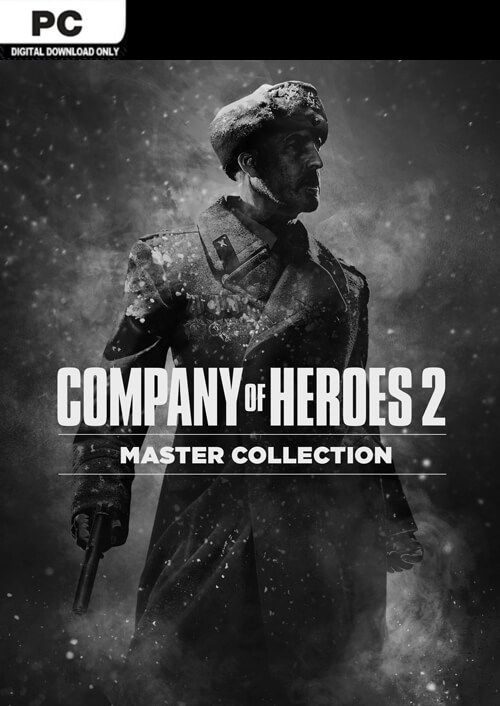 Get all Company of Heroes 2 Master Collection PC game key on stores in cheapest price to download and play instantly. You can save money and time while you compare and buy from reliable stores. To activate a game, you may find an activation procedure below on the site and download the game and play with your friends (Multiplayer).

Company of Heroes 2: Master Collection is a different kind of a real-strategy game that emphasized units instead of soldiers and retreats reinforcements and cover. Discover Eastern Front of World War 2, command groups of soldiers with specific skills, and challenge the Russian winter. Remember, that infantry are vulnerable to death by exposure during blizzards. Warm them via buildings, vehicles or fires. Company of Heroes 2 features occluded fields of view to the game, where lines of sight are realistically blocked by the environment.

Expand your game with the Master Collection

Expand your game and enjoy hours of entertainment.

Discover a completely new, separate campaign for a single player. The in-game events are inspired by a conflict that Winston Churchill described as without a doubt, the biggest battle in which Americans took part. Control the United States forces and lead the battle that took place in the densely wooded point of the Ardennes. Overcome navigational and tactical challenges during 18 completely new scenarios.

Take complete control over a warfare and decide where will you attack next. The decisions you take will affect the entire campaign. Play historical battle during 18 completely new scenarios. Additional tasks within each campaign will change randomly, so campaign will be a unique experience.

Company of Heroes 2 – The Western Front Armies: US Forces

Command the American Armed Forces on the Western Front. The army has its own tactical gameplay options, new types of infantry, team weapons, vehicles, abilities and upgrades available on multiplayer maps. Enjoy the game during different seasons, control your progress, and become more involved in the tactical & strategic aspects.

Company of Heroes 2: The British Forces

Company of Heroes 2: The British Forces is a new, independent edition designed for multiplayer games. Play as steadfast British and their exceptional soldiers! Their forces are characterized by exceptional diversity – they are composed of English, Scots, Welsh and Irish from various social classes of the United Kingdom. Under the command of the charismatic Sir Winston Churchill, these soldiers forget about their differences and become the only people in Western Europe who manage to avoid the iron grip of the axle forces. Lead the last offensive of the Allied forces.

The Adventures of 00 Dilly PC
from among top 0 stores

Rune Lord Xbox One
from among top 0 stores

Reed Remastered Xbox One
from among top 0 stores

The Adventures of 00 Dilly PS4
from among top 0 stores

The Unicorn Princess PS4
from among top 0 stores